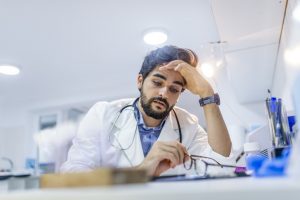 A recent study published in JAMA Network Open discovered primary care physicians (PCPs) are more likely to order cancer screening tests for patients with morning appointments rather than afternoon appointments. This is partly due to “decision fatigue,” the result of the summative burden of screening discussions in earlier appointments, and doctors falling behind as their shift progresses.

The study analyzed data from 33 primary care practices in New Jersey and Pennsylvania between 2014 and 2016. Clinicians ordered colon cancer screening tests for 37 percent of eligible patients with 8 a.m. appointments but only 23 percent of patients with later afternoon appointments.

Decision fatigue, defined as the depletion of self-control and active initiative, happens in every profession, and doctors are no exception. Doctors must make countless decisions regarding patients’ health. As the day goes on, physicians are more likely to forego a cancer screening discussion because they have already initiated these conversations earlier in the day.

Falling Behind in Scheduled Appointments

Appointments at the end of the afternoon tend to be shorter because doctors often are behind schedule. One way to abbreviate patient visits is to address the reason for the appointment only and delay the cancer screening discussion for next time.

If morning patients decline cancer screenings, doctors may be less likely to suggest cancer screenings for patients with later appointments. The brain is very good at conserving energy, and meeting with resistance causes the brain to find more accessible pathways. In this case, the easier pathway would be to avoid suggesting the screening.

Perhaps we can view this data from a different angle. Decision fatigue can affect anyone of any age or profession, from a quarterback at the end of a game to a criminal judge, or even a mother of toddlers.

Making repeated healthcare decisions is exhausting, and doctors willingly carry a heavy yoke of responsibility. Deciphering symptoms, diagnosing illnesses and prescribing care erodes physical and mental energy as the day continues. Instead of passively relying on your doctor to suggest the preventive screenings and tests for which you are eligible, you can be proactive and do a little research for yourself.

Before your next well appointment, call your insurance company and ask what screenings and tests are recommended for your gender and age. You can also ask about whether you have met your deductible for the year and get an estimate for any out-of-pocket charges you may incur for the recommended screenings.

As an informed patient, you can make the most of your doctor appointment by:

Remember, you are the best advocate for your health, so don’t wait for your doctor to initiate the conversation about vital routine screenings. Bring up the subject yourself and be proactive about your care.